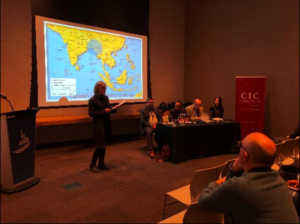 On November 19, the Canadian International Council — Winnipeg Branch hosted an event on the humanitarian crisis faced by the Rohingya people in Myanmar and Bangladesh and how Canada can respond. The event convened at the Canadian Museum for Human Rights and was attended by 30 interested and concerned Manitobans. The panel discussion was moderated by Dr. Anna Snyder of Menno Simons College. 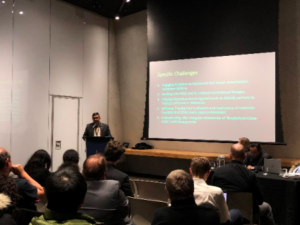 Dr. Kawser Ahmed of the Conflict and Resilience Research Institute, Canada (CRRIC) spoke of his involvement in earlier Rohingya refugee crises as a Bangladeshi military officer, and his presentation centred on how both Myanmar and Bangladesh can be encouraged to better respond to the crisis. He noted that “the protracted statelessness [of the Rohingya people] was the root cause of the crisis,” and said that efforts on behalf of Myanmar to ensure that they were recognized as a legitimate people within the country were crucial to a long term resolution to the crisis. 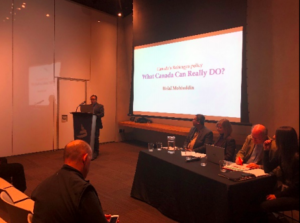 Dr. Helal Mohiuddin, also of the CRRIC, noted how Canada is struggling to respond to the crisis due to the heavy political cost it pays when it speaks up against the human rights abuses. “While these protestations are good for Canada’s moral standing,” Mohiuddin said, “it is harmful to its foreign standing in Asia.” China and other regional players promote a bilateral resolution of the crisis involving Bangladesh and Myanmar and resent calls for a multilateral intervention. He suggested that Canada contribute to the collection of evidence of human rights violations for the International Criminal Court. 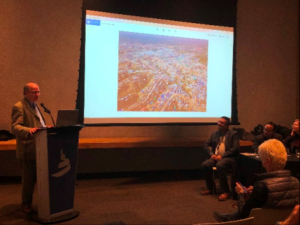 Professor John Packer of the University of Ottawa spoke of how the evidence that the Myanmar military systematically raped and forcibly impregnated thousands of Rohingya women as only the result of a policy of violence and intimidation is, at this point, entirely conclusive. “Myanmar cannot deny responsibility for its laws and policies,” he said. He also spoke against the notion that the Myanmar military is an entity autonomous from the government: the crisis of the Rohingya peoples, he said, was undisputedly a state-sponsored genocide. He also called on Canada to pursue the matter through the International Court of Justice and lamented that Canada, despite its public statements condemning the genocide, has not taken leadership in forming a coalition to exert concentrated pressure on Myanmar and to seek a durable solution. 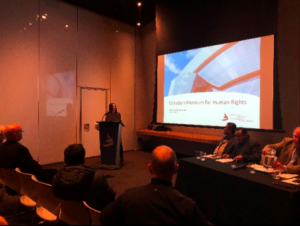 Finally, Dr. Jodi Giesbrecht of the Canadian Museum of Human Rights noted that the CMHR is taking steps to remove references to Aung San Suu Kyi as a human rights defender in the wake of an increasing consensus that she is complicit in the genocide of the Rohingya peoples. She also noted the widespread unawareness of the Canadian people about the issue — in a recent Canada-wide survey, 96% of Manitobans had never heard the word ‘Rohingya’ — and how the CMHR is committed to increasing awareness of the genocide through forums and exhibitions, including a gallery of photographs and the presentation of oral interviews.

In the lively question and answer session that followed, Packer said that it appeared as though Aung San Suu Kyi, as a majoritarian nationalist, was genuinely unsympathetic to the plight of Rohingya peoples. In a separate answer, he said that, while Canada is not legally obligated per se to take the matter to the ICJ, we could at least ask an organ of the UN to seek an Advisory Opinion from the ICJ thereby opening the matter to international review. Ahmed noted that the media of Myanmar and surrounding countries consistently portrays the Rohingya people in a negative light, which contributes to a regional indifference to their plight.

The Winnipeg Branch would like to acknowledge the support of the University of Winnipeg Global College and the Canadian Museum for Human Rights for helping us bring this important foreign policy issue to a Winnipeg audience.