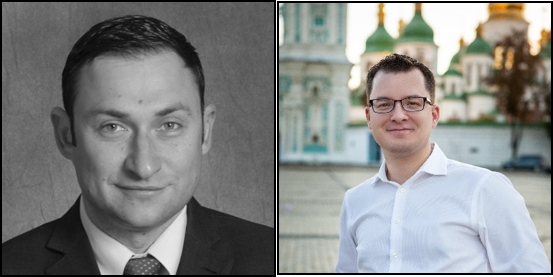 The presentation began with Branch President Brad Kirbyson informing the audience about the Canadian International Council (CIC) and previous events the branch has put on, after which he introduced the two speakers, Ukrainian election observers Denys Volkov and Nick Krawetz.

Both speakers thanked the CIC, the branch, and Oseredok the venue. The speakers then discussed the format of the presentation. The first section featured these topics: Who is an observer and what do they do; How to apply and why; and sample observer situations. The second section was more analytical, focusing on the election with topics such as election context, where they observed, and the presidential election results. The third and final section was centered around the experiences of the speakers themselves and their personal reflections on the election. Together with a Q&A session, these sections composed the presentation.

Mr. Volkov began the presentation by laying out who is an observer. Observers are Canadian Citizens fluent in English, and typically the local language(s). There are 3 different roles that election observers can fill. The first is the core team, which includes the Head of Mission and the Deputy Head of Mission. The core team is responsible for putting the mission together and has the smallest number of people out of the three positions. The second role is the short-term observer (STO) team, where members are present in the country for around 10 days; they usually function in teams of two. The final role is the long-term observer (LTO) team, who go to the country and spend months in different regions to monitor the lead up to the election and prepare things for the STOs. In terms of the three positions, the core team is the most competitive to get into, LTOs may have a hard time getting the time off work, and STOs are the easiest to manage and apply for.

Mr. Volkov continued by describing what an observer does. Typically, observers work long hours under difficult conditions. An average day during the elections consists of arriving at the polling stations early, staying until they close, and staying for the counting of the ballots and the transfer of votes to regional stations. Throughout one’s time as an election observer, Mr. Volkov pointed out, that as Canadians, observers must adhere to the laws of Canada as well as the laws of the country they are deployed in. Furthermore, it is the role of the Core Team to decide what is shared with the media, so observers should not make comments to the media about the election process because comments based on personal observations can bring a negative light to the mission. One example of inappropriate media use was an observer’s post on social media in which he switched from English to Russian in an attempt to fool the core team. Situations like that can lead to observers being sent home.

Beyond media interactions, observers need to adhere to strict protocols, remain impartial, and follow the code of conduct that is emphasized during their training. Election observers are not “election police.” Their role is to observe and report, not enforce or interfere. Observers must be very careful to avoid interfering in the election process, offering advice, or signing related documents; their training has been improved to highlight this. After discussing the activities of an observer, Mr. Volkov presented images of OSCE/ODIHR forms that observers fill out.

The above sections described observer positions, their functions, and their guidelines, so Mr. Volkov carried on with the presentation discussing how to apply and why. The how is very simple, and is in fact more of a where. The organizations responsible for the mission are CANADEM (@CANADEM.CA) also known as the International Civilian Response Corps, and the Office for Democratic Institutions and Human Rights (ODIHR), through the Organization for Security and Co-operation in Europe (OSCE, @OSCE.org). These organizations are responsible for the mission and are therefore the organizations one must submit their applications to if they wish to be an election observer.  Mr. Volkov concluded the first section of the presentation by providing some motivations for applying. The main reason one should apply is because it is an enriching, rewarding, unique experience where observers get to represent Canada and meet interesting people. Afterwards Mr. Volkov welcomed Mr. Krawetz who proceeded onto the second section.

Mr. Krawetz began by explaining the election context and why the 2019 Ukrainian presidential election was interesting. There were 7 key reasons that the 2019 election was very important. The first reason is that Ukraine has been embroiled in 5+ years of war since the Euromaidan crisis stemming from pro-Europe protests in Kiev in 2014. It has resulted in 13,000 people dead, 1.5 million displaced and 5 million voters disenfranchised. The second reason is due to the slow recovery from an economic downturn between 2011-2015 that saw the GDP of Ukraine decline by 18.8%, currency devaluation and high inflation. The election was also very complex. On election day there were 39 candidates on the ballot including 30 ‘technical candidates’ which Mr. Krawetz explained later. The fourth factor that played a key role in the election was the fact that oligarchs control the media which is primarily Russian and has a coverage bias and are the primary source of information in Ukraine. The fifth was the lack of legitimate debate between candidates which prevented greater understanding of policy and values. The sixth was the fact that Ukraine was preparing for parliamentary elections which muddied up the political process for citizens. The final factor was the amount of ‘technical candidates’ mentioned above. Along with a graphic Mr. Krawetz explained that technical candidates are running on behalf of other candidates and are solely involved to endorse candidates and throw off voters who might be supporters of their rival candidates.

Ukraine is a large country and observers can be sent anywhere. The two speakers were sent to different places, with Mr. Volkov operating in the Kharkiv province and Mr. Krawetz was in the provinces of Khmelnytskyi and Dnipropetrovsk, which included President Volodymyr Zelenskiy’s hometown. The two speakers were stationed at those locations during their time in Ukraine throughout both rounds of the election. In the first round of the election Zelenskiy received 30.24% of the votes, while incumbent Petro Poroshenko placed second with 15.95%. In the second round Zelenskiy won with 73.22% of the votes. Mr. Krawetz used a graphic to highlight the fact that Zelenskiy won almost all of Eastern Ukraine while Poroshenko won a province in the west of the country. With a clear picture of the election and its results the speakers moved on to section 3 of the presentation, to give their own personal analysis of the election discuss why they thought it concluded the way it did.

They began this section by discussing why they believe Poroshenko lost. Firstly, Poroshenko’s presidency was a contradiction because he was an oligarch elected following an anti-oligarch revolution. Second, he was unable to fulfill his mandate which was shown mainly by the fact that he did not end the war. Thirdly, his presidency included lots of reforms which was hard on everyday Ukrainians. Lastly, Poroshenko was seen as corrupt and Ukrainians had a decreased tolerance for corruption. Simply put, Poroshenko did not address the issues that Ukrainians focus on.

In the opinions of the speakers, Zelenskiy won on themes of ending the war, fighting corruption, national unity and reconciliation. Not only was he smart about key issues, Zelenskiy is also a young, successful businessman and TV personality so his face was familiar to Ukrainians going into the election. This new young face was ideal for Ukrainians who desired change in leadership with an increase in anti-establishment populist views. Zelenskiy used his youth to run a creative campaign that emphasized TV and social media use to reach voters, and maintained an air of mystery by avoiding interviews and divisive issues. Finally, he had a relevant slogan, “End era of greed, poverty and lies,” in contrast to Poroshenko’s “Army. Language. Faith,” Which didn’t resonate with voters. Overall, it was a highly competitive campaign that resulted in a peaceful transfer of power. Speakers emphasized that Zelenskiy is popular but there is uncertainty on whether or not he will fulfill his mandate. Due to the highly competitive campaign it is now more important than ever that the western world remains engaged in the region.