CIC Victoria has become an avid supporter of the University of Victoria’s (UVic) Model United Nations (UN) Club and members recently took part in the 14th annual UVic Model UN Conference.  The weekend conference was open to all high school and postsecondary education students interested in the UN and its work and some 100 students took part.  During the weekend, a Reformed Security Council organization was adopted with 15 non-permanent members and 10 permanent members with veto power.  Quite a few topics were discussed and resolutions passed in the Security Council and the General Assembly all covered by a seven-person student International Press Corps.  In addition to the student led activities, Chris Kilford, the President of CIC Victoria moderated a panel discussion so that students attending the conference could learn about what it’s like to work overseas in often demanding conditions.  Chris was joined by Diane E. Tourell who had recently served as a Judicial Affairs Officer with MONUSCO, the peacekeeping mission in the Democratic Republic of the Congo, and Major-General (retired) Guy Tousignant. In August 1994, Guy was appointed Force Commander and Assistant Secretary-General for the UN Assistance Mission for Rwanda and on retirement from the military, accepted the position of Secretary General of CARE International based in Brussels.  Joining them were Phil Calvert, the former Canadian Ambassador to Thailand, Cambodia and Laos and Chris Brown, who served in various overseas diplomatic postings in the Caribbean, the UN, as chargé d’affaires in Vietnam and Consul General in Cape Town, South Africa.  The conference was a great opportunity to introduce CIC to the students and many of the conference organizers this year were CIC student members. 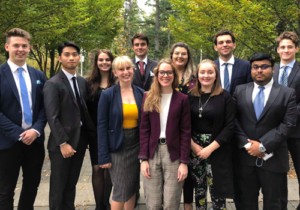