CIC Victoria: Claws of the Panda: Beijing’s Campaign of Influence and Intimidation in Canada

CIC Victoria: Claws of the Panda: Beijing’s Campaign of Influence and Intimidation in Canada

It is one of those rare coincidences that publishers dream of. Jonathan Manthorpe’s latest book, Claws of the Panda: Beijing’s Campaign of Influence and Intimidation in Canada, is hitting the shelves just as tensions between Ottawa and Beijing hit new levels over the detention of Huawei executive Meng Wanzhou. 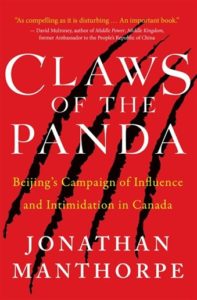 On 16 January, in front of 180 CIC Victoria members and guests, Jonathan – a highly regarded journalist with over 40 years of international reporting experience – told a lunchtime meeting of the CIC Victoria Branch that he welcomed the current confrontation between Ottawa and Beijing and Ottawa’s insistence on allowing the rule of law to take its course in the hands of an independent judiciary. He said that for far too long the incompatible values between Canada and the Chinese Communist Party (CCP) had been hidden by a Beijing-led charm offensive directed at Canada, and naivete on the part of Canadian opinion-makers. These deceptions and delusions, he said, have blighted Sino-Canadian relations for over 70 years, and it is this campaign that his book, Claws of the Panda, describes.

During his talk, Jonathan noted that the foundational links between the CCP and the Canadian political, business and academic establishments go back to the Canadian missionaries who worked in China from the 1880s until the communist takeover in 1949. The missionaries and their China-born children, the Mish Kids, were strongly represented in the Department of External Affairs as it developed in the 1950s and 1960s. They brought with them sympathy for the social and economic aspirations of the CCP, which in turn did much to prepare the ground for Canadian diplomatic recognition of the People’s Republic of China in 1970. Indeed, Canada’s first three ambassadors that served in China between April 1971 and September 1980 – Ralph Collins, Charles Small and Arthur Menzies – were all sons of missionaries who had been born in China and had significant Chinese cultural knowledge.

Continuing, Jonathan observed that bending Canadian public policy to Beijing’s wishes was one of the major reasons why the CCP sought, and continues to seek, influence in Canada. In particular:

In his concluding remarks, Jonathan added that the CCP is also out to control and intimidate Canadians, mostly of Chinese heritage, who campaign for political and social reform in China. A theme also running through his book, he added, is that it is Canadians of Chinese, Tibetan, Uigher and Taiwanese heritage who are the main victims of the CCP’s campaign.

Jonathan’s talk was followed by a lively question and answer period. The event was also the book launch for Claws of the Panda and a precursor to many more talks across the country that Jonathan will be giving in the next few months. In the coming days, for example, Jonathan and Margaret Cornish will be teaming up for two ‘politics in the pub’ presentations in Victoria focused on the latest developments – both quickly filled to capacity, which is a sure sign that Canadians regard the growing tensions between Canada and China with great concern.