NATO’s commitments are about more than just funding percentages explained CIC President Mark Sedra on November 20, 2017, as he testified to the House of Commons Standing Committee on National Defence as part of study on Canada’s Involvement in NATO. While Canada does not meet the 2% of GDP target for defence expenditures set by the NATO in 2006 Sedra argues that Canada might be able to offset its monetary contribution to NATO by continuing to offer strong, qualitative contributions and that Canada “has consistently punched above its weight in other areas — most notably troop deployment.” President Sedra’s full testimony is available here. His testimony was also covered by iPolitics: Curtis Rafter, “NATO commitment about more than just cash, committee told”, iPolitics (November 20, 2017).

This is the second testimony given by the CIC to the House of Commons’ study of Canada’s Involvement in NATO. CIC Senior Fellow Danielle Stodilka provided a briefing to the Standing Committee on National Defence on November 1, 2017. 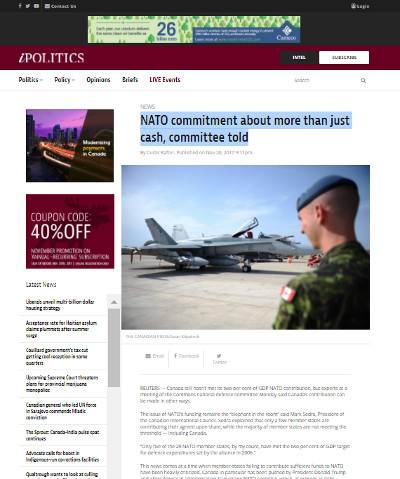